28th November 2020 QR Code
A new QR code has now been set up for the Woodhead Railway Heritage Group, this QR Code will be used on Correspondence & Advertising purpose. 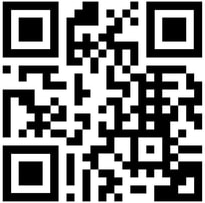 01st November 2020 Lease update
We are still currently waiting to hear from network Rail regarding the Lease, this should now have been completed, and are now chasing up.
18th October 2020 AGM
We held our AGM today which was held via the Skype Social Media platform, we had to hod the meeting via Skype due to not being allowed a gathering due to the current Coronavirus Pandemic.
15th September 2020 Lease update
All relevant documentation has now been submitted to Network Rail Commercial Team, we will be appointed a Manager to oversee our Lease application.
12th September 2020 our Volunteers
here are some recent photos of our volunteers back at work since the COVID19 lockdown 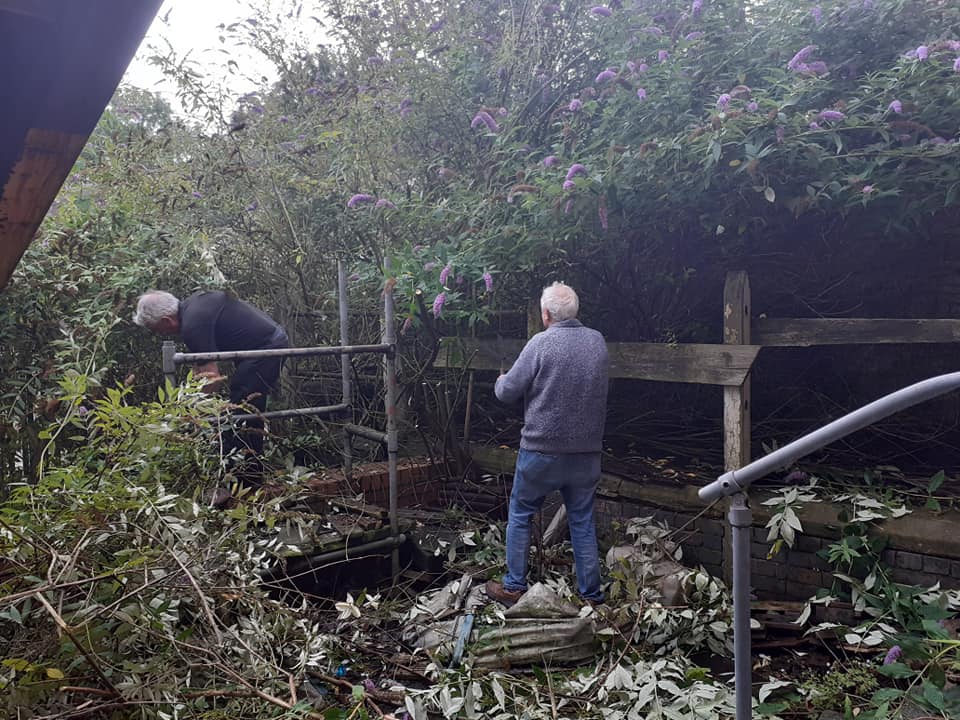 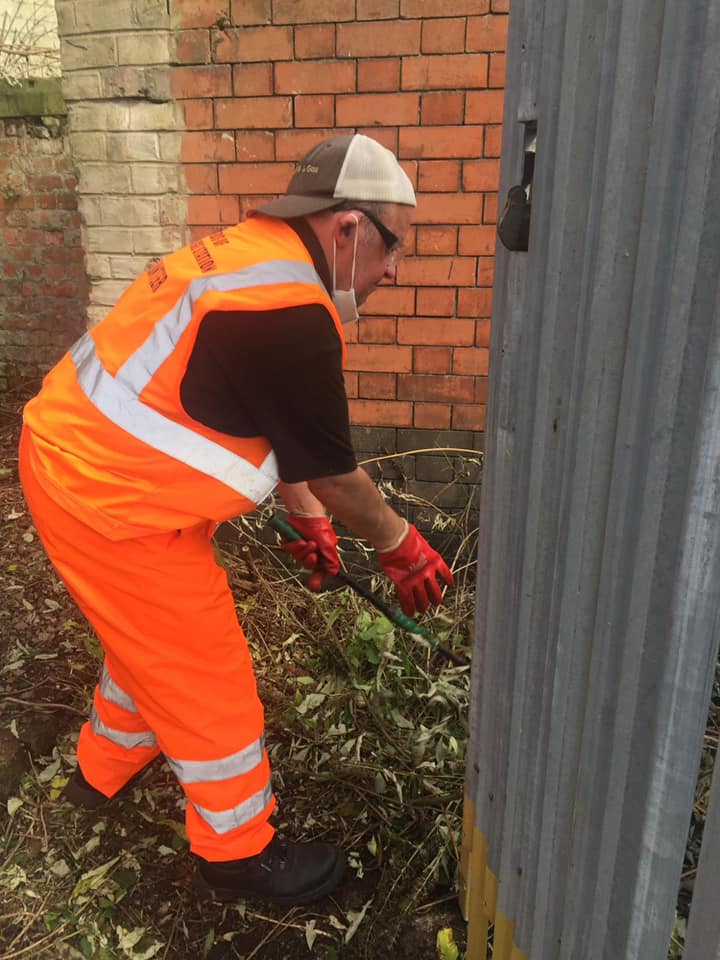 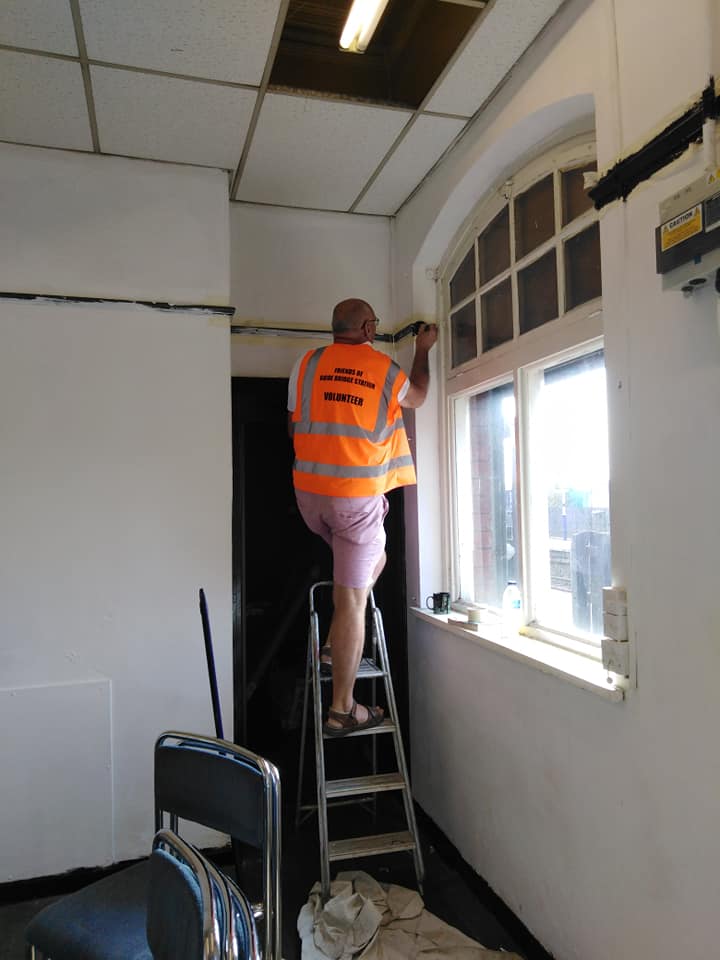 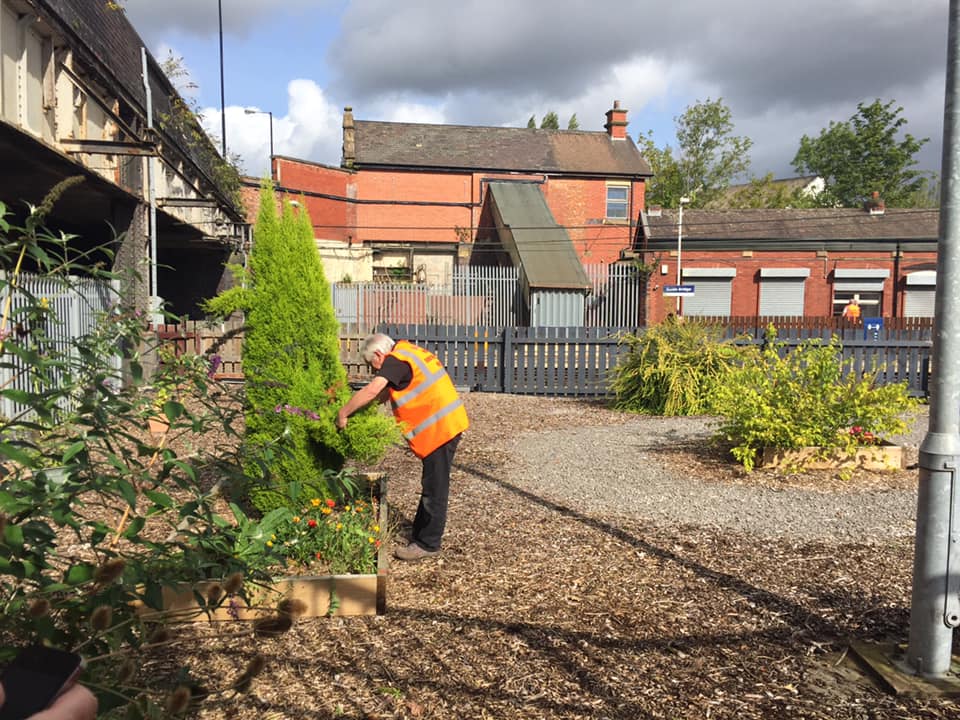 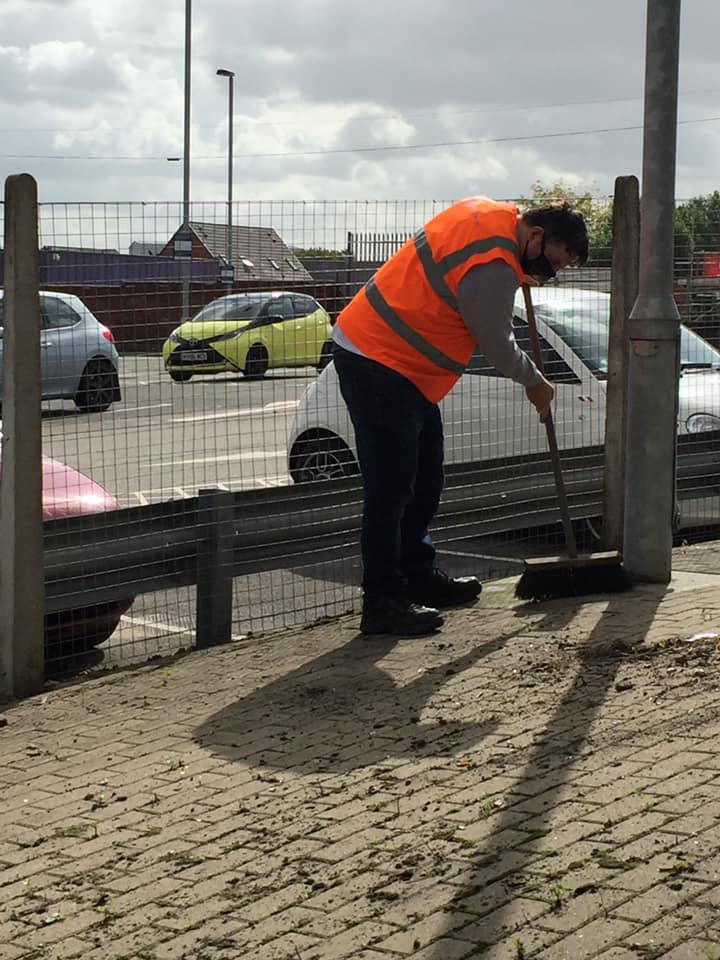 30th June 2020 Volunteering to commence
Volunteering services are to commence from Saturday 4th July, this is great news however we must adhere to current government guidelines which states only 2 volunteers allowed on site per day following social distancing guidelines.
12th June 2020 Museum Site Visit
Renovation work on the Museum project is coming to an end with just a few snagging jobs left to do 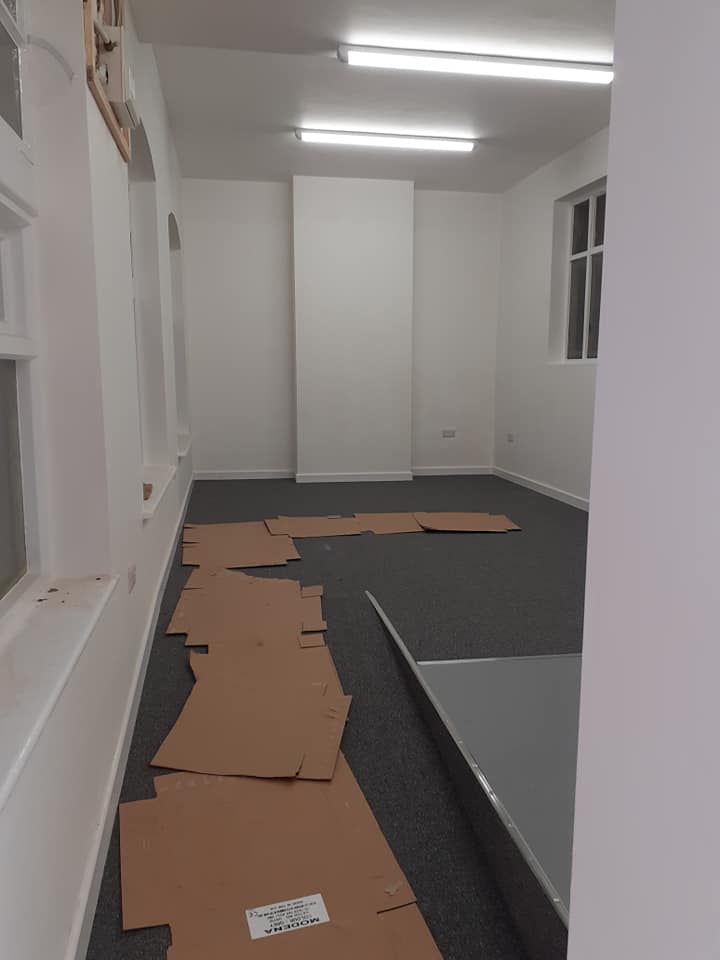 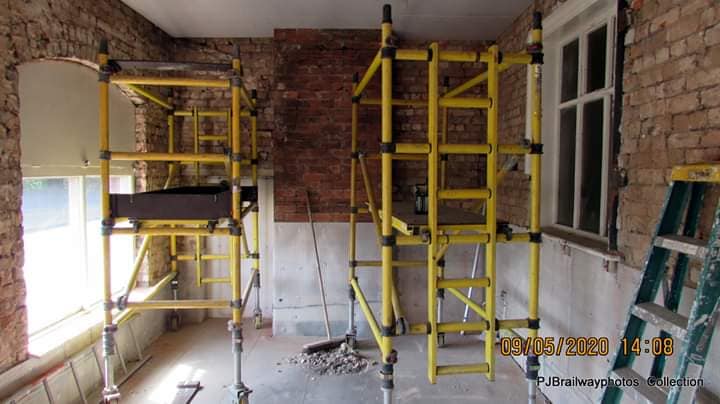 20th April 2020 New Twitter Account
We have now set up a new Twitter account for the Woodhead Railway Heritage Group, the account is @wrhg10 please do join and keep up to date with news as it happens.
07th March 2020 Woodhead 175 Anniversary Events
Today a meeting took place to discuss the Woodhead 175 Anniversary events for this year some of the ideas that have been discussed are as follows:
- Loco Hauled train to coincide with events at Guide Bridge, Hattersley, Glossop, and Hadfield stations, this will most likely take place on a Sunday.
- Naming of a 323 train with a suitable name plate to celebrate the Anniversary, this will take place at Manchester Piccadilly.
- An event at NRM York to celebrate 26020 and to ask if the loco could be on display on the turntable, we would hold an event for one day at NRM.
- Request of Peter Hendy Chairman of Network Rail to open the Woodhead Railway Museum.
- 22nd Dec for volunteers to travel the line in period costume handing out information and freebies to the passengers. 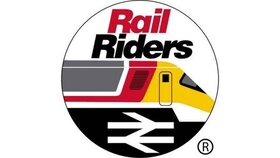 15th June 2019 Teddy Bears Picnic Event
​Today we held our third Teddy Bears Picnic event which saw our biggest turn out of people attending at all four stations, we even had a vintage vehicle attend with thanks to Jonathan Hulse, this was a great day and also raised over over 60 in funds. A huge thank you to the volunteers who attended. 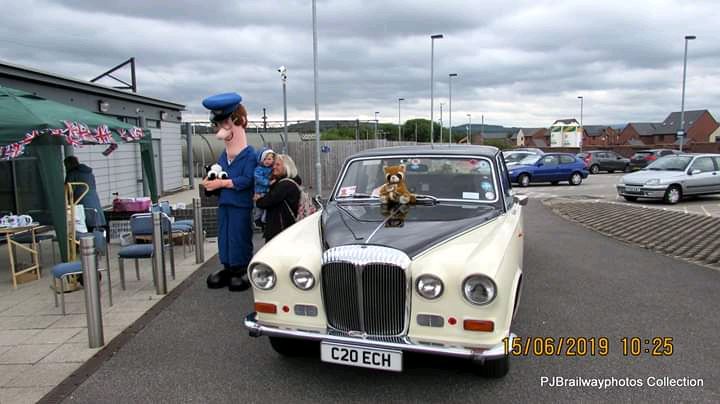 09th April 2019 Alternative Facebook Group Page
A new Facebook Page Group has been created solely dedicated to Project work for the WRHG, the Group is called 'Woodhead Rail Group', if you would like to get involved as a working volunteer or follow the work progress, then please do join the Group.

.08th November 2018 Armistice Event
Sat 3rd November saw a visit from some Soldiers in uniform visit the station as part of the Glossop Line Armistice Event, Guide Bridge Station had a display of over 400 knitted Poppies. 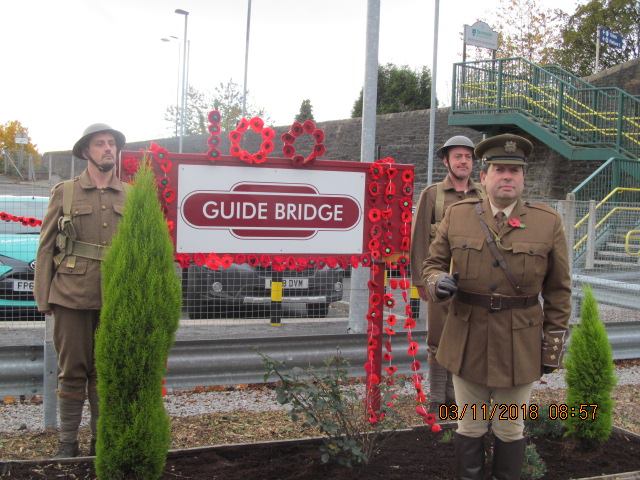 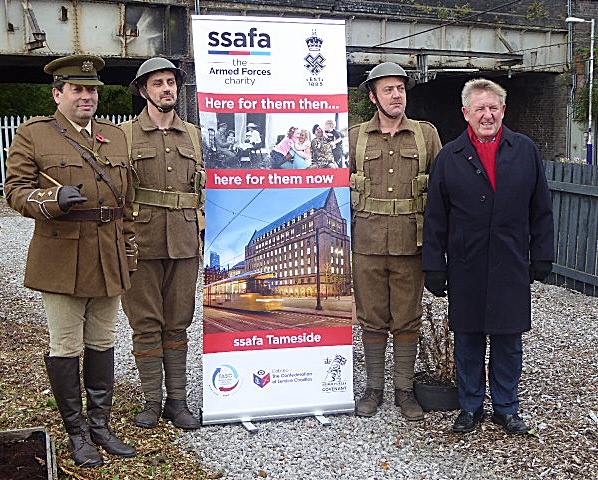 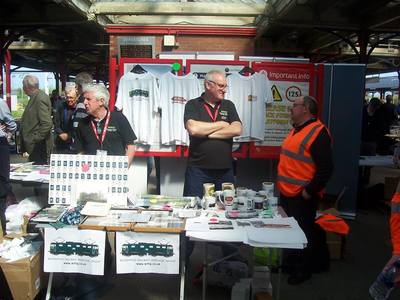 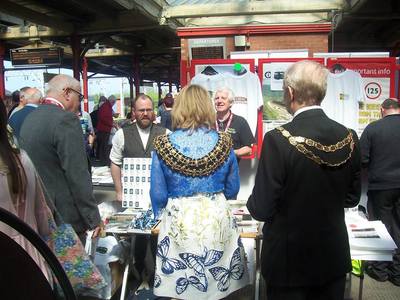 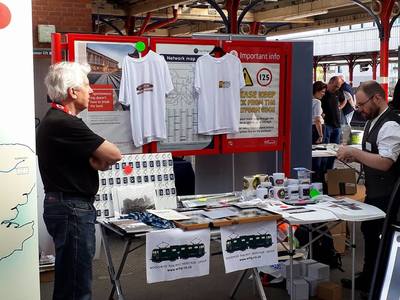 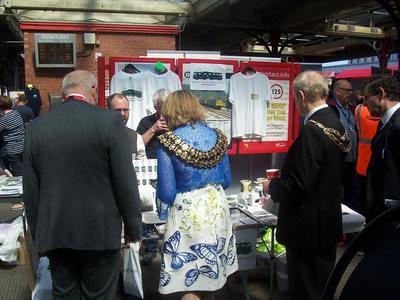 8th December 2017 - ACoRP Registered
The WRHG® have now been formally registered with ACoRP - Assotiation of Community Rail Partnerships, the WRHG® will be working closely with ACoRP with our up coming projects to help put life back into the Glossop Line which once formed part of the Iconic Woodhead Railway Heritage Group.

04th December 2017 - Volunteering Day
The volunteers had assistance today clearing the land for the Woodhead Wild Flower Garden Project, the guys were assisted by the Community Payback Team who worked alongside the Volunteers and made much progress. Our next step is for more chippings and then to lay membrane for the footpath. 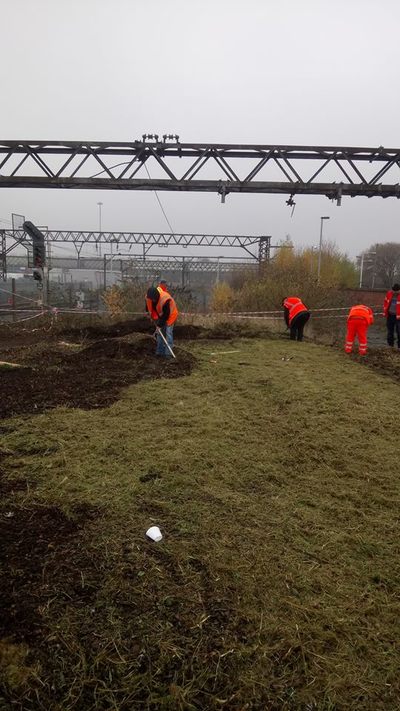 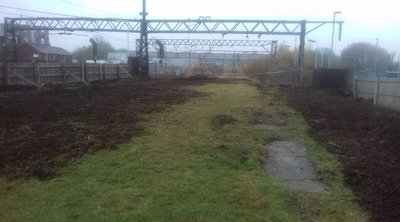 23rd September 2017 - WRHG Event
Saturday 23rd September saw our first event held at Guide Bridge Station, we did have a few visitors including the Bahamas locomotive Society, we raised £86 in donations. 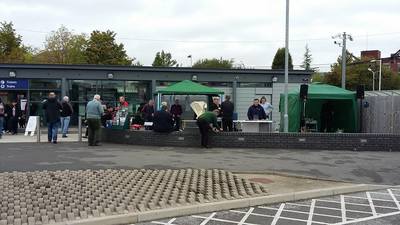 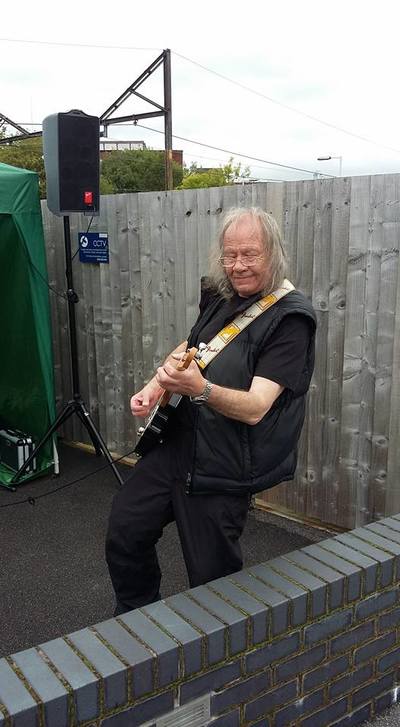 09th September 2017 - Jolly Boys Outing
Saturday 9th September saw our first Coach trip taking in the Woodhead route from  Manchester Piccadilly to the Woodhead Tunnel, we first went to MOSI to view the electric display and was met and had a talk by MOSI Volunteer Anthony eslie Dawson, from there we then went to Guide Bridge Station, then on to Godley where we were met by a couple of the Transpenine Trail Volunteers who gave a talk on the work they are doing unearthing the Godley Turntable.
From Godley we then went to Dinting to view the Engine shed and signal box, by this time the weather had picked up making it more pleasent, from here we then made our way to the Woodhead tunnel entrance visiting both ends Woodhead & Dunford, from here we finally made our way to the Dog & Partridge pub for a well deserved pint.

There will be a part 2 to this trip early 2018 taking in the Sheffield end of the Woodhead route. 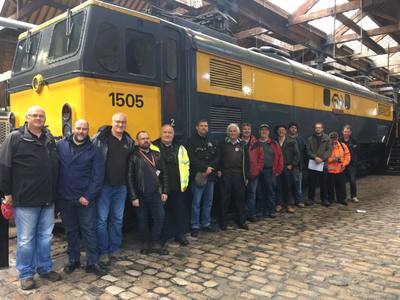 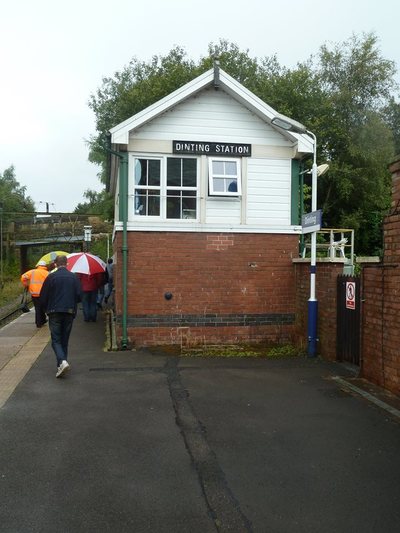 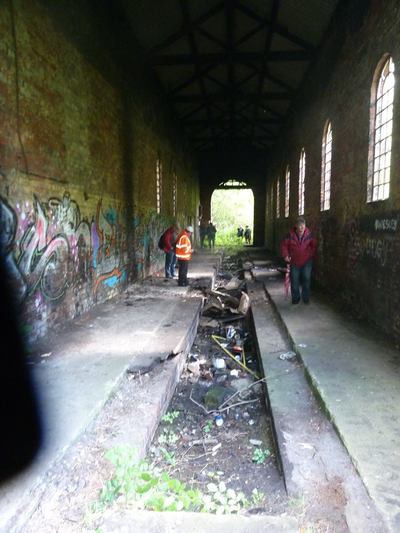 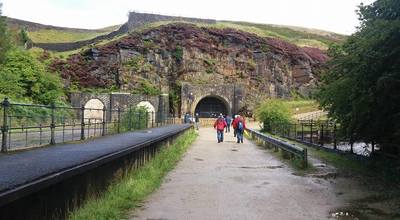 05th Aug 2017 - Class 506 Cab
Given the sad news that the Electric Museum Coventry are due to close October this year, I can confirm that the Class 506 Cab has been given a new home going to the Cab Yard South Wales, once the WRHG have a secure site up North then the Cab will be moved to a new home in the north. 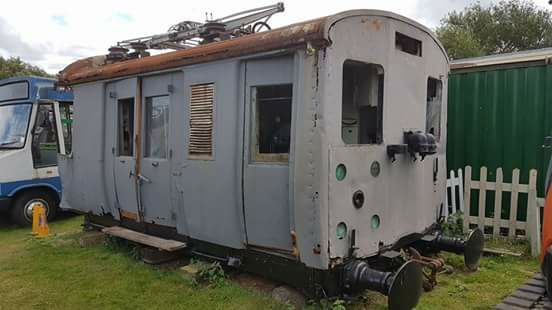 05th Aug 2017 - UPDATE on th Heritage Centre & ACORP Application
It has been confirmand that Network Rail will start the full buiding survey once the process is in place for the WRHG to take on the Lease for the building from Northern Railway.

ACORP have agreed to allow the WRHG to register the WRHG with ACORP, this will allow greater access and publicity for the WRHG, this will come at an annual cost to the Group but is worth joining ACORP
ttps://acorp.uk.com
02nd July 2017 - WRHG gets a mention in this months ACoRP Train on Line eNewsletter
The Woodhead Railway Heritage Group has been given a mention in this months ACoRP eNewsletter explaining what the Group have acheieved including our Group aims & objectives, we are still waiting to hear if the WRHG can be formally registered with ACoRP.

The article can be found in the section 'The Brake Van' 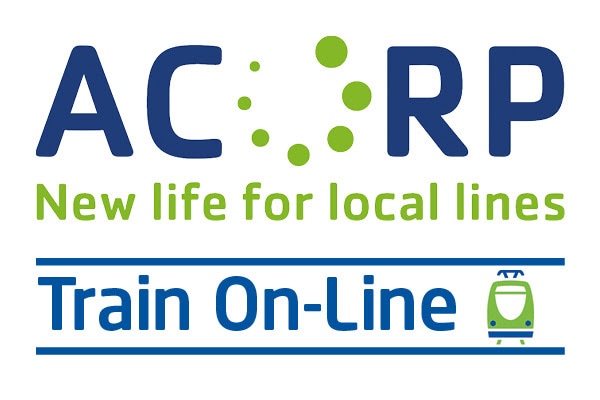 Monday 26th June 2017 - Confirmation from Northern Railway regarding the Heritage Centre Building
I am pleased to nnounce that Northern Railway have confirmed that Network Railway will keep the Heritage Centre building under their list of assets for Guide Bridge Station, both Northern Railway & Network Rail have said they are happy to assist with the project, our next steps now are to seek funding oppertunities to enable to progress with the project.
Sunday 25th June 2017 - New Merchandise
One of our volunteers Barry Williams is now producing mug for the group, the mugs are retailing at £8 each which covers the cost of P&P, these are now available via the shop page. 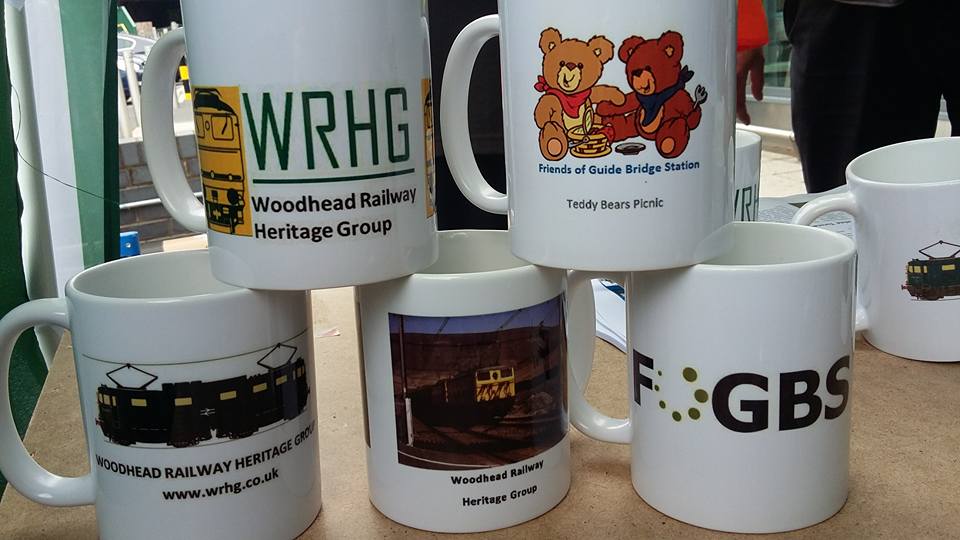 Wednesday 1st June 2017 - Glossop Chronicle Article
This week the Glossop Chrinicle Newspaper contacted the Chairman Andy Kettle to seek a news story about the posibilities the WRHG have regards reopening the Dinting Railway Centre, the article made front page and has triggered much interest for the Group. 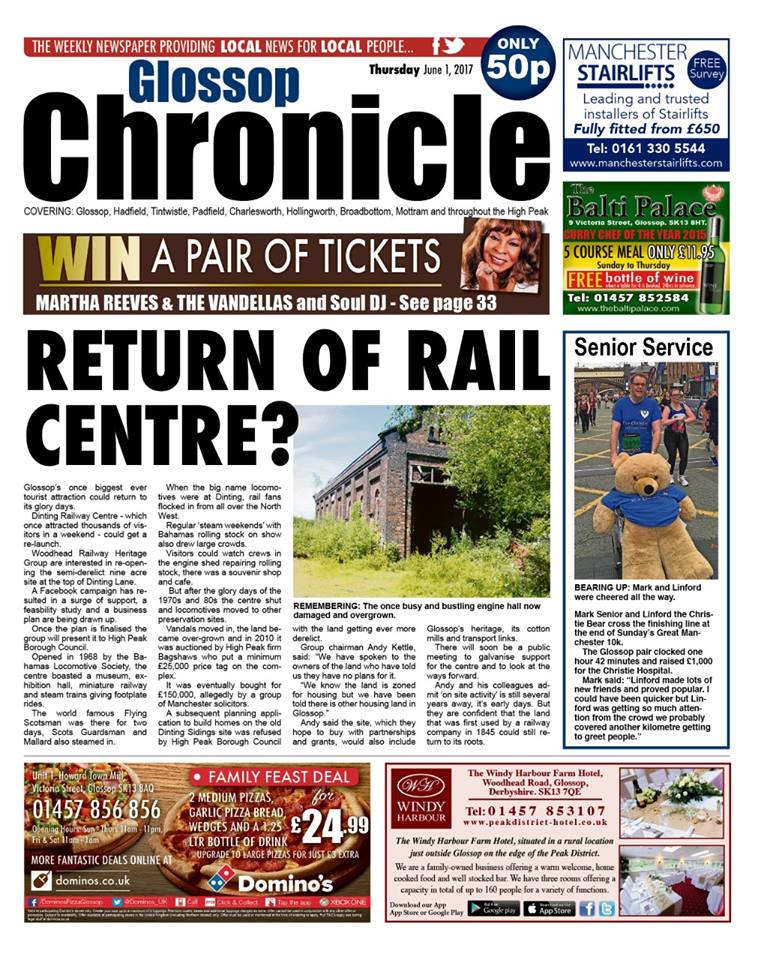 Tuesday 30th May 2017 - Working Volunteer reqruitment
The WRHG are now reqruiting for working volunteers to help with all aspects of jobs required along the Glossop Line, the aims and objectives of the volunteering group are to assist other local station Friends groups and local Communities with projects that need support, as well as maintining the stations along the Glossop line that do not have a Friends Group.

Volunteer membership is available via the Membership page by selecting the drop down box when asked if want to be registered as a Working Volunteer.

Sunday 21st May 2017 - MP visit to Guide Bridge Station
On Sunday 21st May Tameside local MP Angela Reynor and Tameside Mayor Joyce Bowerman visited Guide Bridge Station as part of Meeting the Community in memory of the late Jo Fox. Members of the volunteer group met up at the Station to give a guided tour of the work being done and had the opertunity to promote our Heritage Centre project.
Although the visit was short, much was discussed and support was offered by both Angela Raynor MP & CLLR Joyce Bowerman. 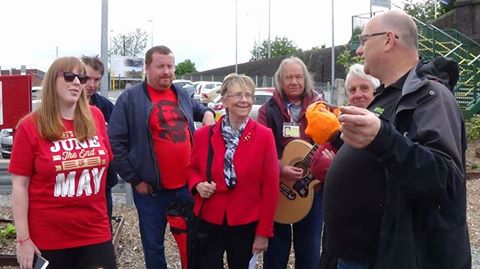 Thursday 7th December 2016 - Station Building
The WRHG have recieved confirmation that the vacant building at Guide Bridge Station can be leased to the WRHG pending self funding and Contracts to be developed into a Woodhead Railway Heritage Centre..
The building to be utilised can be found on Platform 2 at Guide Bridge Station, we do plan to have access to the inside of the building early January to assess the renovation work required.
The Group have also been in contact with ACoRP [Assostiation of Community Rail Partneships] who have offered thier support towards the Woodhead Railway Heritage Centre.

The Groups Bank Account and Paypal account are up and running, the Group now bank's with Royal Bank of Scotland
Wed 31st August 2016 - Dinting Railway Centre

The Group has recieved confirmation from the current owners of the Dinting Railway Centre site who have confirmed that they have no plans to develop the site, they did ask if we had suggestions for the site, so a Committee Meeting has been called for Sat 10th September to discuss the next steps to look at the feasibility of reopening the Dinting Railway Centre. in order to progress with this project a new corporate Logo has been developed to help with promotion and an advertising [shown below].

New Corporate Polo Shirts are currently being trilled and will be made available to Members once the groups Bank account has been activated, these will be selling at £14 each which will include P&P, we will notify you when purchases can be made.
Mon 13th June 2016 - Group Membership Cards

The Group Membership Cards have now been ordered via Vista Print, once the Bank account has been set up [July] we will start taking Memberships. Money raised from the Membership is to assist with any expenditure required.

We had our first meeting today at Guide Bridge Station with a small number participating. I opened the meeting welcoming those who attended and i gave a brief outline what the purpose of the group is.
We then appointed the positions of Chairman (Andy Kettle) and the positions of Secretary and Treasurer have been appointed to (Simon Thomas ) further positions will be appointed as and when required.
The Constitution was agreed although minor changes are to be made. It was agreed that there will be quarterly meetings (venue tbc).
​The first steps for the group now are to start talking to key players, information will be shared as and when it comes available and will be displayed both here and the group's website page. This finally leaves me to say that the WRHG is now officially up and running.edit.